We were just having a lovely discussion about our early computing days, and Evie mentioned Oregon Trail. How many hours did we spend, how many dead oxen did we leave upon the trail? How many trunks of goods had to be sacrificed, not to mention our own dear family members?

On a happier note, looks like there's a matching LOLCAT for this topic:

Is jailtime the new black?

I predict jailtime will be the new hotness -- those tiny dogs are sooo 2006 -- and soon you'll see Brit and La Lohan and maybe even Mischa (in a desperate attempt to revitalize her dying career) following suit.
Posted by Unknown at 10:54 AM No comments:

Apparently Second Life is being used by Jesuits to proselytize to a whole new generation of potential "recruits."

In other news, I joined the Elebits group in Facebook. If you like the game, you should join, too!
Posted by Unknown at 11:39 PM No comments:

Thanks to Alexia Mechanique for passing this along:

Why in God's name am I lusting after a new car? (No comments, please, Bethanye!) At least it's a good car this time:

Quote of the Day

From Pirates of the Caribbean: Dead Man's Chest:

Lord Cutler Beckett: No doubt you've discovered that loyalty is no longer the currency of the realm as your father believes.

Elizabeth Swann: Then what is?

Lord Cutler Beckett: I'm afraid currency is the currency of the realm.
Posted by Unknown at 12:27 PM No comments:

The Go Center of Second Life 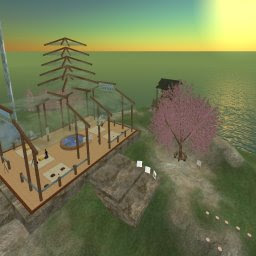 Finally, a place in Second Life that I can spend *hours* visiting! The Go Center of Second Life is an amazing place, created by my friends Zarf Vantongerloo and Bambam Sachertorte. Long live the Go Center!
Posted by Unknown at 10:25 PM No comments:

I spent some time downloading and playing the latest XBox360 game demos yesterday. Most were mediocre, but I did really enjoy Overlord. It's a mix of Pikmin and Fable. I mean, if you'd chosen the evil path in Fable and the Pikmin were evil goblins who ate sheep whole... All in all, a pretty good time.
Posted by Unknown at 9:20 PM No comments:

New games on the horizon!

I played the XBox 360 demo of Blue Dragon tonight. It's much better than I had anticipated. Innovative combat system -- you can even fight as you wander about the map, at least a bit -- and the "Corporeal" move offers pretty cool effects. Looks like it might be a good old-skool RPG for the 360. Due out at the end of August, 2007.

I never thought I'd say it, but I'm crazy for Hellgate London. This is nothing I usually would dream of playing, but something about it compels me. The only launch date I can find is for Summer 2007...whatever that means.
Posted by Unknown at 12:40 AM No comments:

Seems like a common theme: people discuss a terrible time in their professional life -- a new job, a tough class, a summer working on the potato farm -- it doesn't really matter what, exactly. The point is that many, many "important" people who have accomplished a lot in life had to start somewhere. They did something (or some number of things) that were uncomfortable, dirty, difficult, or just plain miserable. But they were smart enough to seize the opportunity to learn and grow and move forward with those lessons learned making them a better person.
Posted by Unknown at 11:43 PM No comments:

Sitting here in our new apartment.

Preparing for work at a new job.

Lots of change. Lots of excitement, and a bit of nervousness, too.
Posted by Unknown at 10:52 PM No comments: