One of the best resources on the Web for locating game developers, publishers, game industry organizations and so forth:

GameDevMap
Posted by Unknown at 3:27 PM No comments:

"As much as you try to remain cavalier about what's happening, your heart is too engaged to be casual about it. Complications arise from your eagerness to focus on the big picture while you keep getting dragged back into the details. It's challenging to maintain a positive attitude when loose ends continue to unravel. Do the best you can for a few more days by playing both extremes; the intensity will begin to subside after tomorrow's Full Moon."

Posted by Unknown at 9:15 PM No comments:

Dunno if you've seen the RPG Motivational Posters site yet. If not, you should check it out...well, if you're a gaming dork like me, that is. 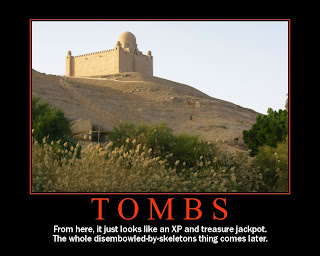 On Monday we discovered that Charlotte had been vomiting. She seemed better that evening, but Tuesday she was even worse. We took her to the Vet that afternoon, where she was given a blood test. The Vet called a few hours later, once we'd returned home, to say that her kidney values were terrible and that she should go to the emergency room to be rehydrated.

After spending the night in the hospital, on an IV, she again seemed better. The staff told us that she was improving, and that we could visit in the evening. We arrived at the hospital at around 6:45pm on Tuesday, and waited over an hour to see her. Finally, at 8:15pm, they brought her to us. We stayed together in the "Family Room" -- James petted and loved her, while I got to pet her a bit.

Finally, the doctor came in and told us that rather than getting better, her condition had worsened. The kidney panel showed that the organ was much worse than before, and despite the fluids she hadn't peed in a day. The prognosis was dire: her kidneys had completely stopped functioning. The doctor said that what was left of her life would be painful, so we were advised to euthanization was her only choice.

You must understand that Charlotte just turned 5 years old. We never had an idea that she was ill, and certainly not that she had congenital kidney problems. But there we were, faced with choosing a slow, painful death or a quick, immediate one. What would she want? Should we subject her to a car ride home, simply to see it one last time? Surely that was selfish when she felt so sick -- her constant meows told us that she just wasn't herself.

James and I were devastated, discussing options for what seemed like a very long time. We wept and held Charlotte, and each other. Then the doctor came in, and quietly injected anaesthetic into the IV tube. Charlotte took a few final breaths, and then was gone.

This was a horrible experience, and we are still very much in shock. We will love Charlotte forever, and can only hope that she's well on her way to a much better place.
Posted by Unknown at 9:13 PM No comments: