New InstantAction preview site is up and running!

Just in time for our holiday vacation, the InstantAction Preview Site is up and running!

It's really exciting to think that we're getting closer to the launch. Can't wait to see more games and more features as the weeks pass.

Logging some links for posterity:

Strangest Christmas card ever. Be sure to try *all* of the options as some are better than others!

Philip talks about Second Life now and going forward
Posted by Unknown at 3:10 PM No comments:

People at work think I'm crazy. And yeah, I'm trying to eat better, too, so this is really a bad idea anyway.

However. That being said...I MUST try this new candy bar:

I just checked the IGDA Leadership Forum page and found it updated with session reviews, articles from Gamasutra and even some cool pictures. 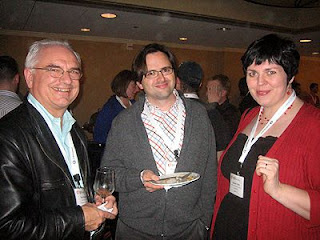 This is a picture of me (right) with my two favorite game industry guys -- Don Daglow (left) and Rodney Gibbs (center).

Oh yeah -- on the front page of the Leadership site, there's a nice picture of Mark DeLoura, too!
Posted by Unknown at 9:28 PM No comments:

I have added the first Peterson Family Cookbook entry to this website. Check out the famous Christmas cookie recipe!

Oh how I love Christmas!
Posted by Unknown at 9:35 PM No comments:

Yes, week two...and the final week, too. I beat it. Full Paragon and Completist were awarded, but not too many other achievements.

So now I have to go back and play it again as a Renegade and beat it again. G*d, I do NOT look forward to collecting all of those damn minerals and medals and stuff again. The missions are fine -- at least I can treat those differently.

Oh yeah -- speaking of Mass Effect...you really must see the Something Awful version "Ass Effect." Yes, it's crude, but it's funny, too. More reverent than SA usually is, that's for sure!
Posted by Unknown at 11:25 PM No comments:

What to do in case of attack

It's okay...just follow the helpful tips here!
Posted by Unknown at 6:43 PM No comments: